After the cancellation of the 2020 Cannes Film Festival (a first since 1946),  the summer of 2021 marked a triumphant return for the world-renowned event. Movies such as “Annette” and “OSS 117: From Africa With Love” were featured, and “Titane” took home the coveted Palme d’Or award, with director Julie Ducournau being the first solo female winner, and only the second female recipient. True to its nature, the 2021 Cannes Film Festival also provided a red carpet fashion parade of celebrities, socialites, and influencers donning gowns and suits of all sorts. Here are some of our favorite looks from the festival. 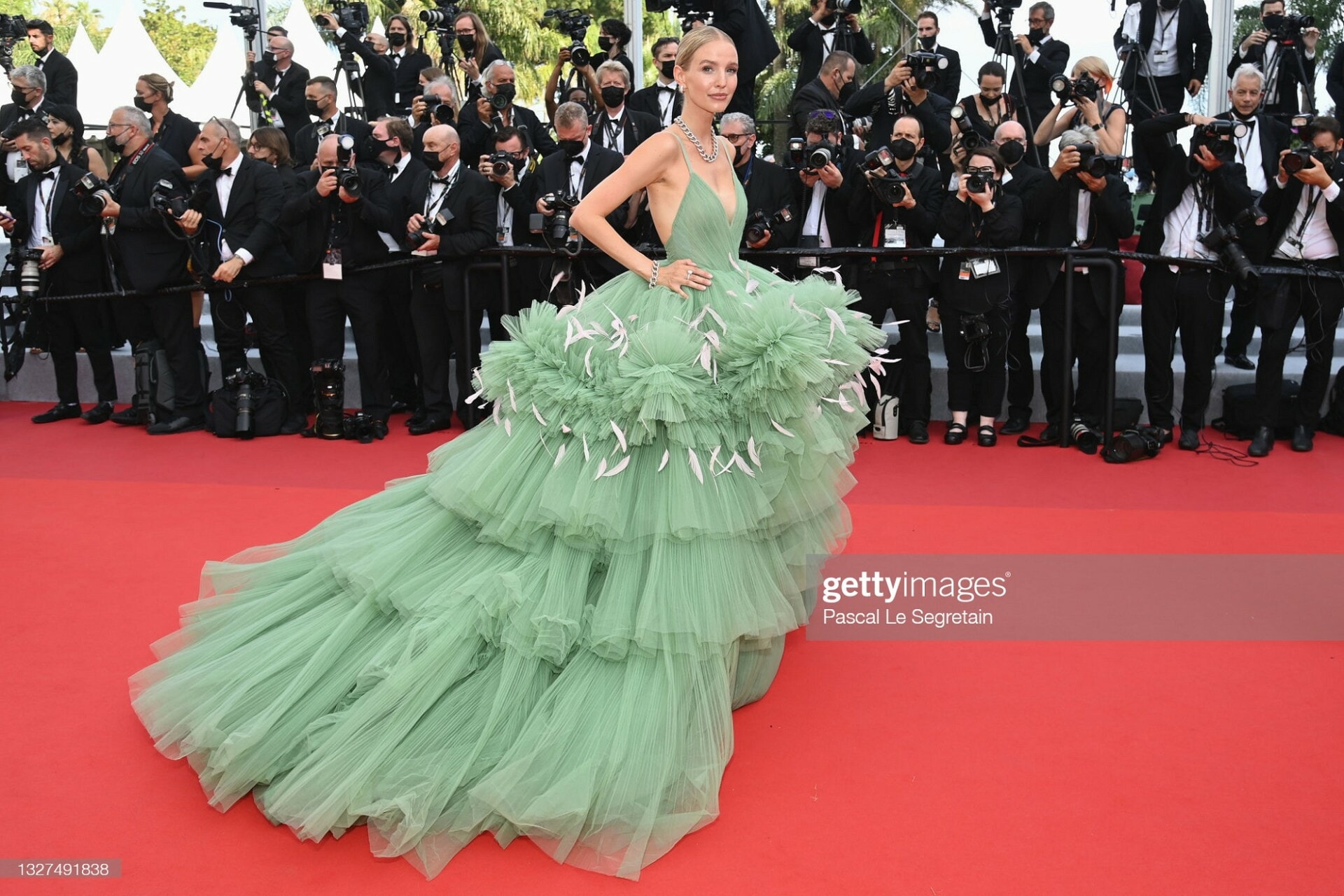 German fashion blogger, model, and influencer Leonie Hanne wore several gorgeous gowns throughout the 2021 Cannes Film Festival, but one of her standout looks was a baby green ballgown from the Nicole + Felicia Spring/Summer 2022 collection. 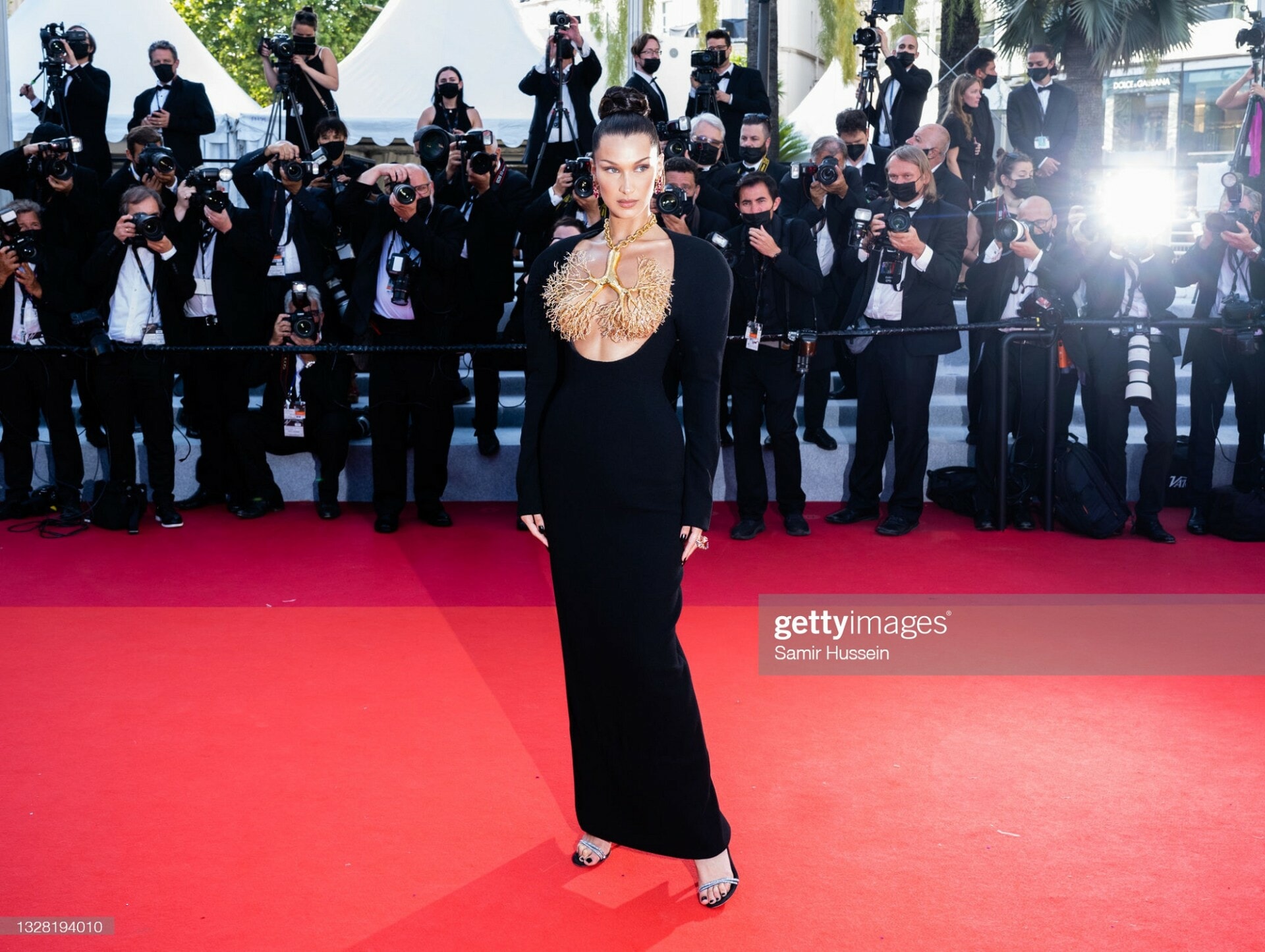 The Cannes Film Festival may have been canceled for 2020, but some 2020 designer collections still had their moment in the spotlight. For her the screening of “Benedetta,” French actress Tina Kunakey made an ultraviolet statement in Valentino from the Spring 2020 couture collection. The silk dress and hooded cape combo was finished with a red faille bow. 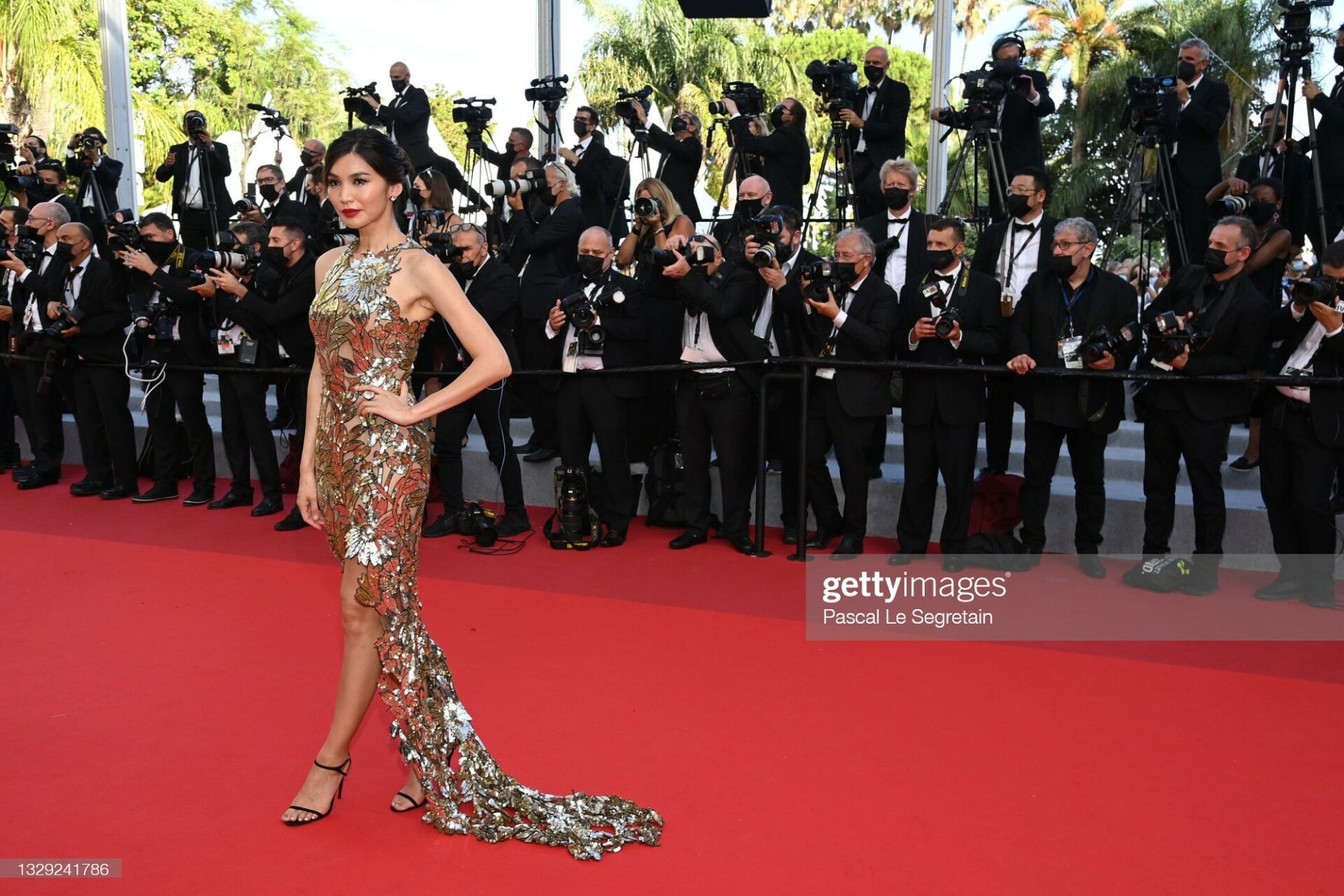 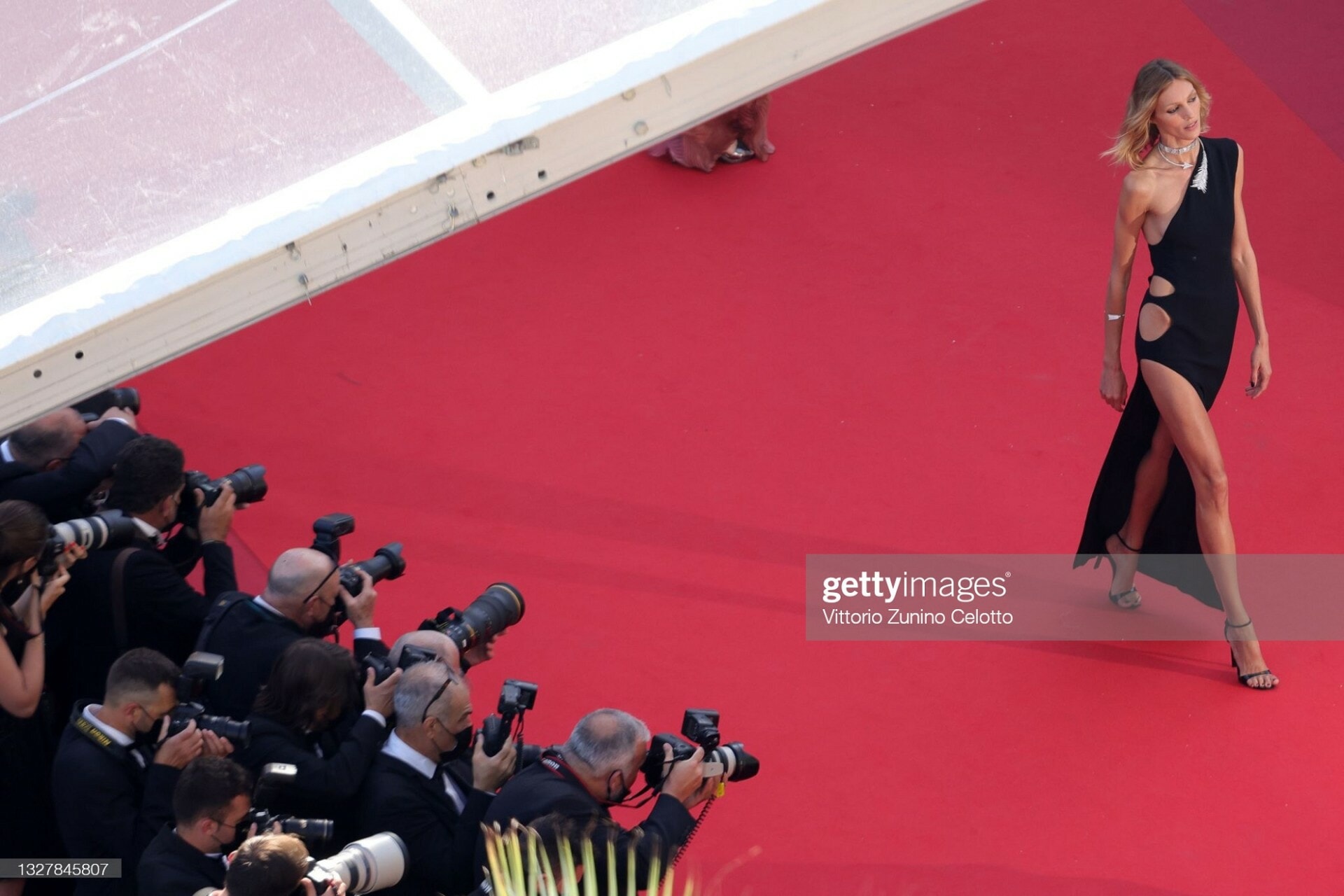 Anja Rubik turned the red carpet into a runway. Saint Laurent was the model’s designer of choice for the 2021 Cannes Festival. One of her gowns included a sexy black cutout number, which she wore to the screening of “Benedetta.” 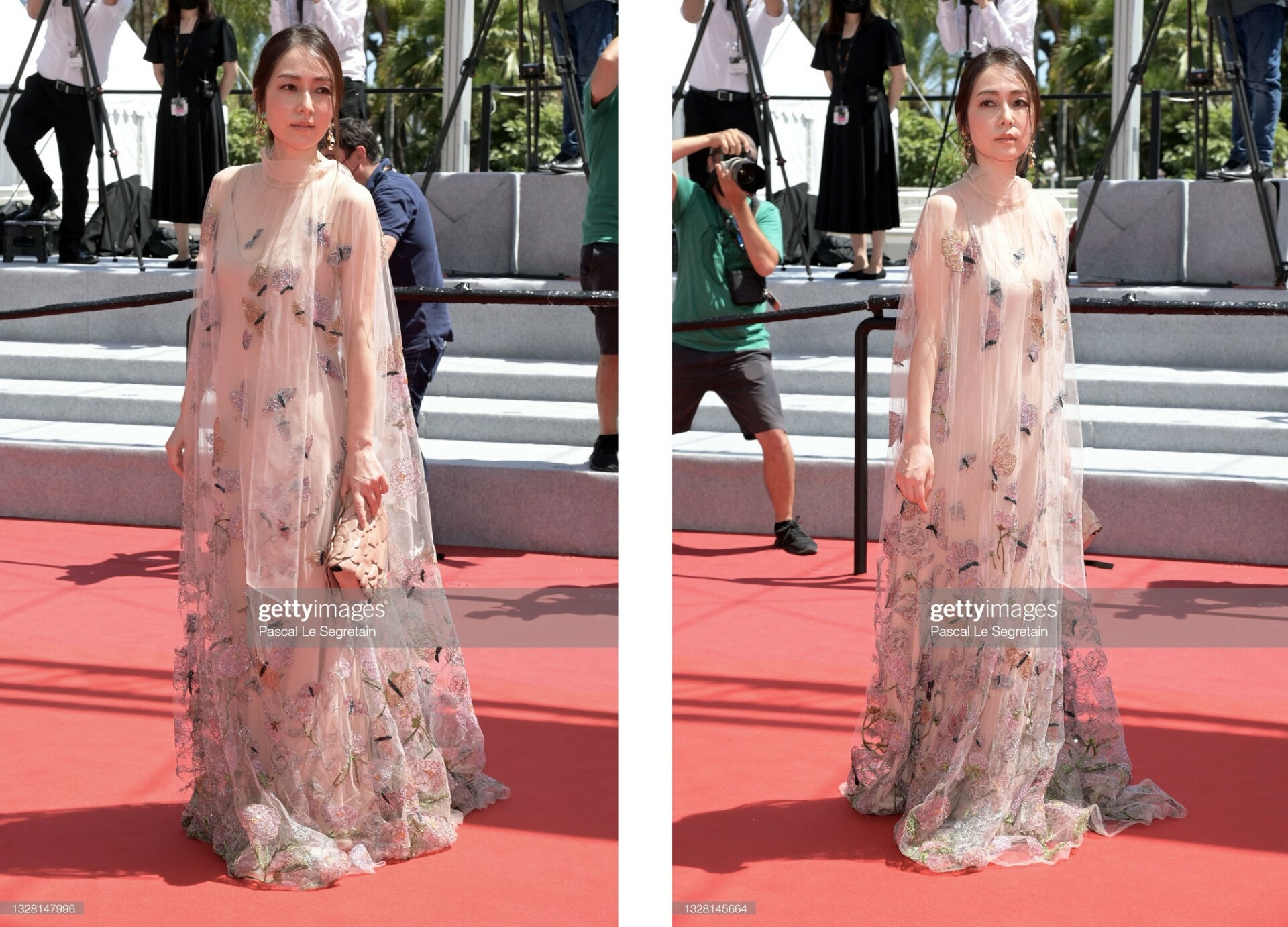 Summers on the French Riviera call for flowing gowns and floral prints. Japanese film and TV actress, Reika Kirishima, attended the screening of “Drive My Car” in a romantic Valentino dress covered in flowers and butterflies. 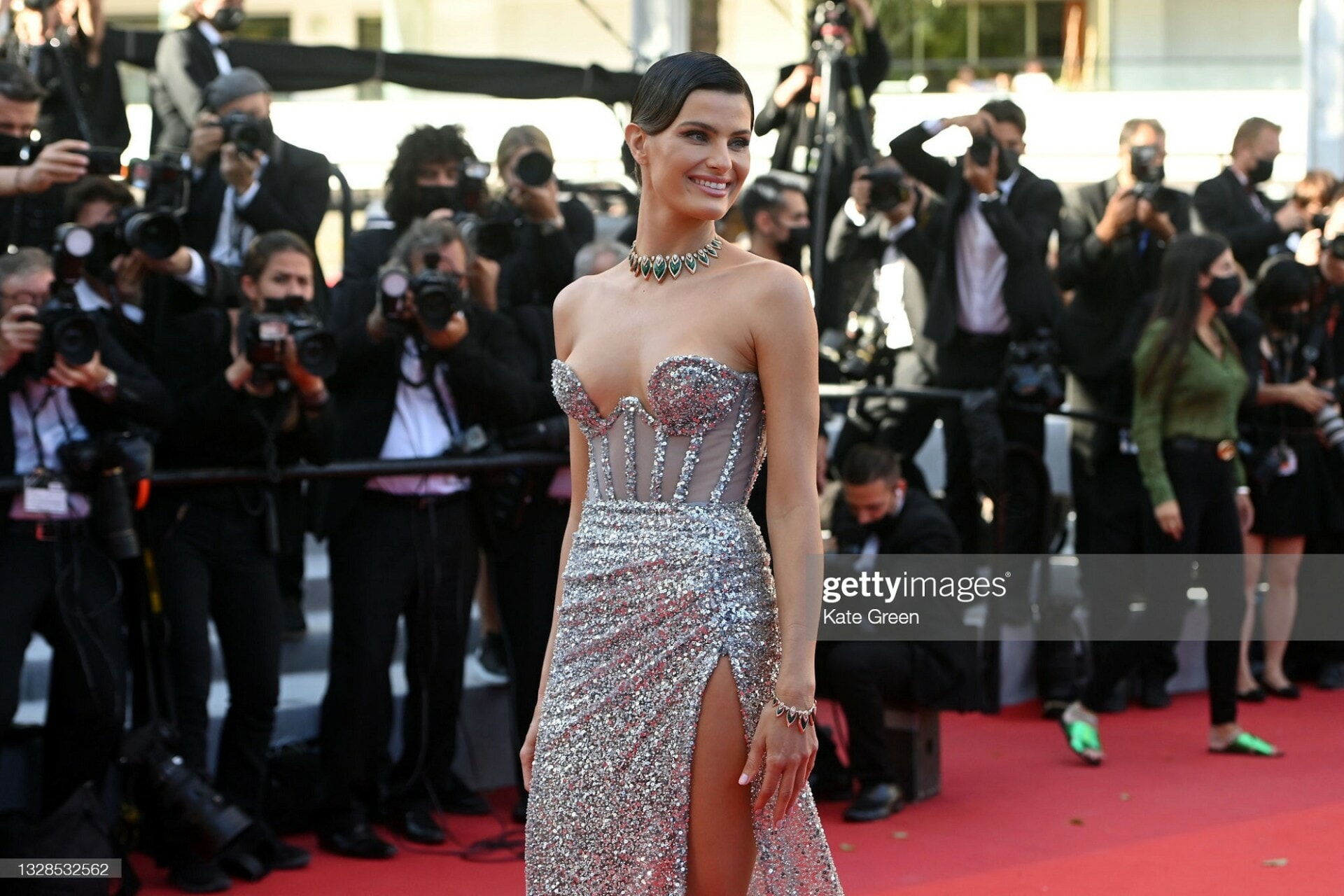 Talk about glamorous. Brazilian model Isabeli Fonana sparkled at the screening of “Aline, The Voice Of Love,” wearing a silver number by Rami Kadi. 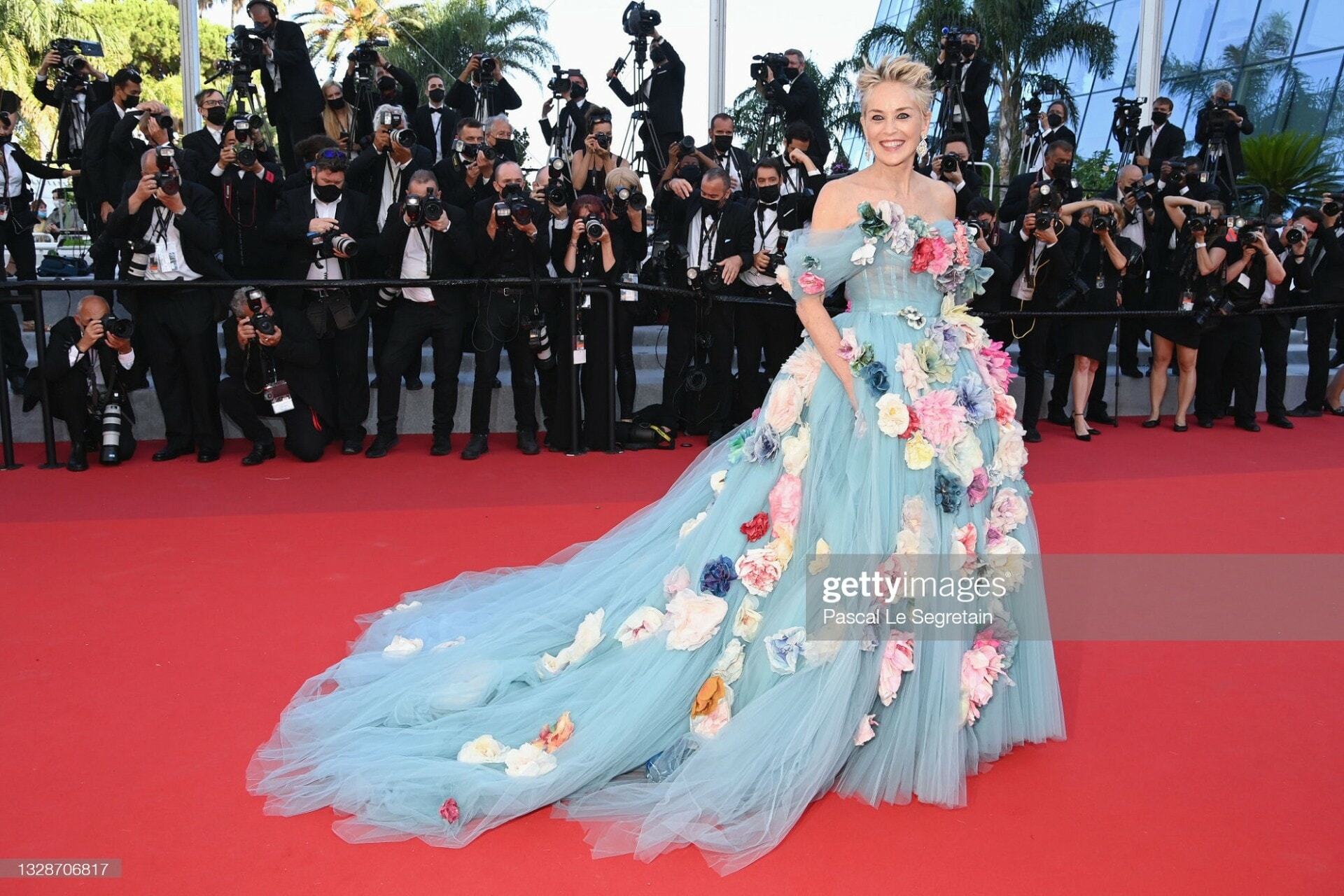 Sharon Stone is no shrinking violet. The Hollywood star wore a colorful and ornate Dolce & Gabbana gown to the screening of “A Felesegam Tortenete/The Story Of My Wife.”

Volume and texture were common themes on the red carpet. For her appearance at the “The Story Of My Wife” screening, British actress and model Amy Jackson chose a gown that paired both volume and texture in an unexpected way. Created by Atelier Zuhra, the off-shoulder ballgown was accessorized with Chopard jewelry for a refined and elegant finish. 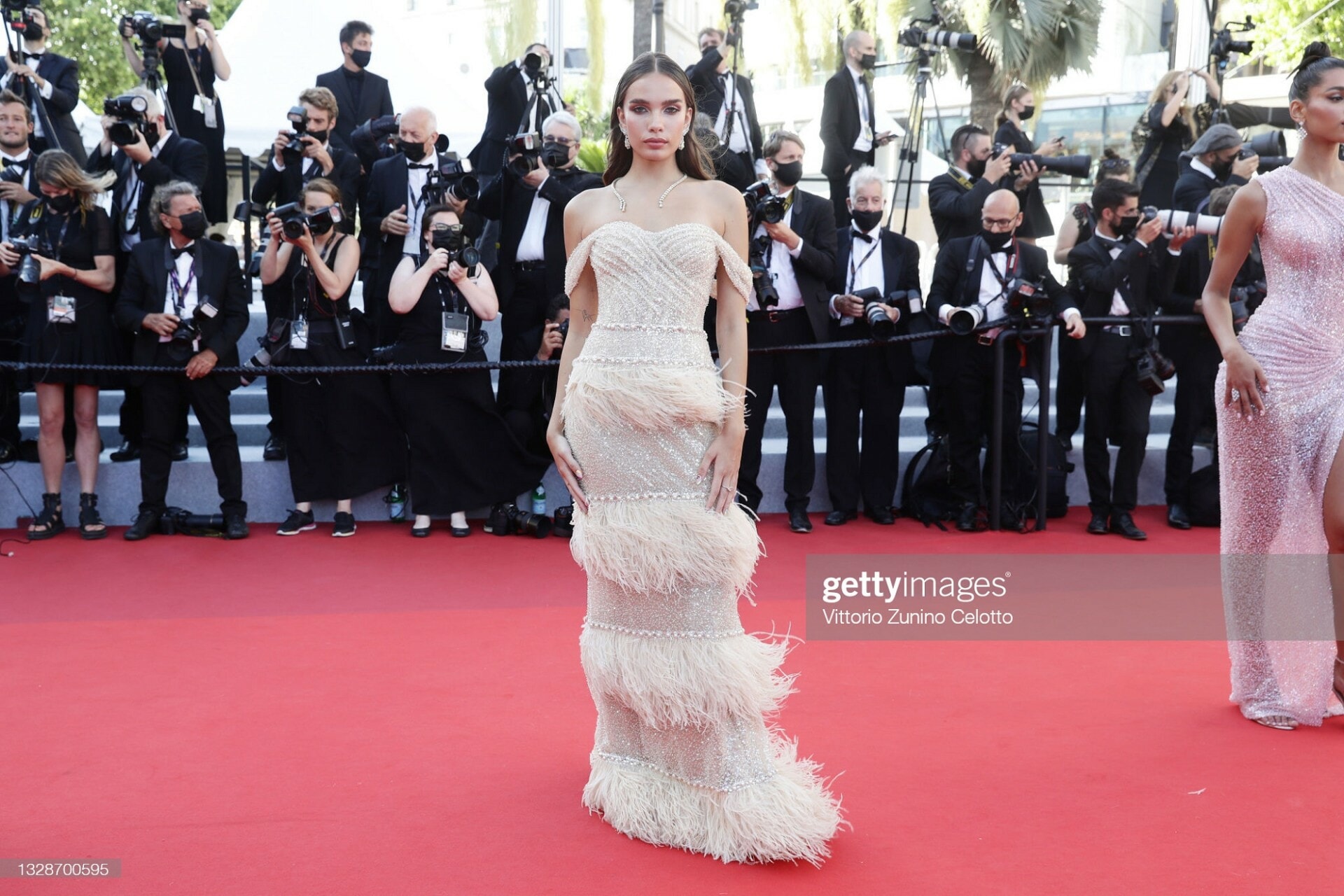 Feathery plumes are oh-so French and chic. Designer Rami Kadi uses feathers in a timeless, yet modern way, layering them in tiers. Hana Cross showed up to the Cannes Film Festival wearing the off-shoulder gown to perfection.

Marta Lozano had a stunning “lady in red” moment. The Spanish influencer chose a Lorenzo Caprile ballgown-pantsuit hybrid with a dramatic train. Every Cannes Film Festival has an all-red fashion showstopper, and this may be the one for 2021. What’s a red carpet in France without a little avant-garde? For the screening of “Les Intranquilles (The Restless),” French actress Camille Razat wore a ruched figure-hugging dress by Balmain. 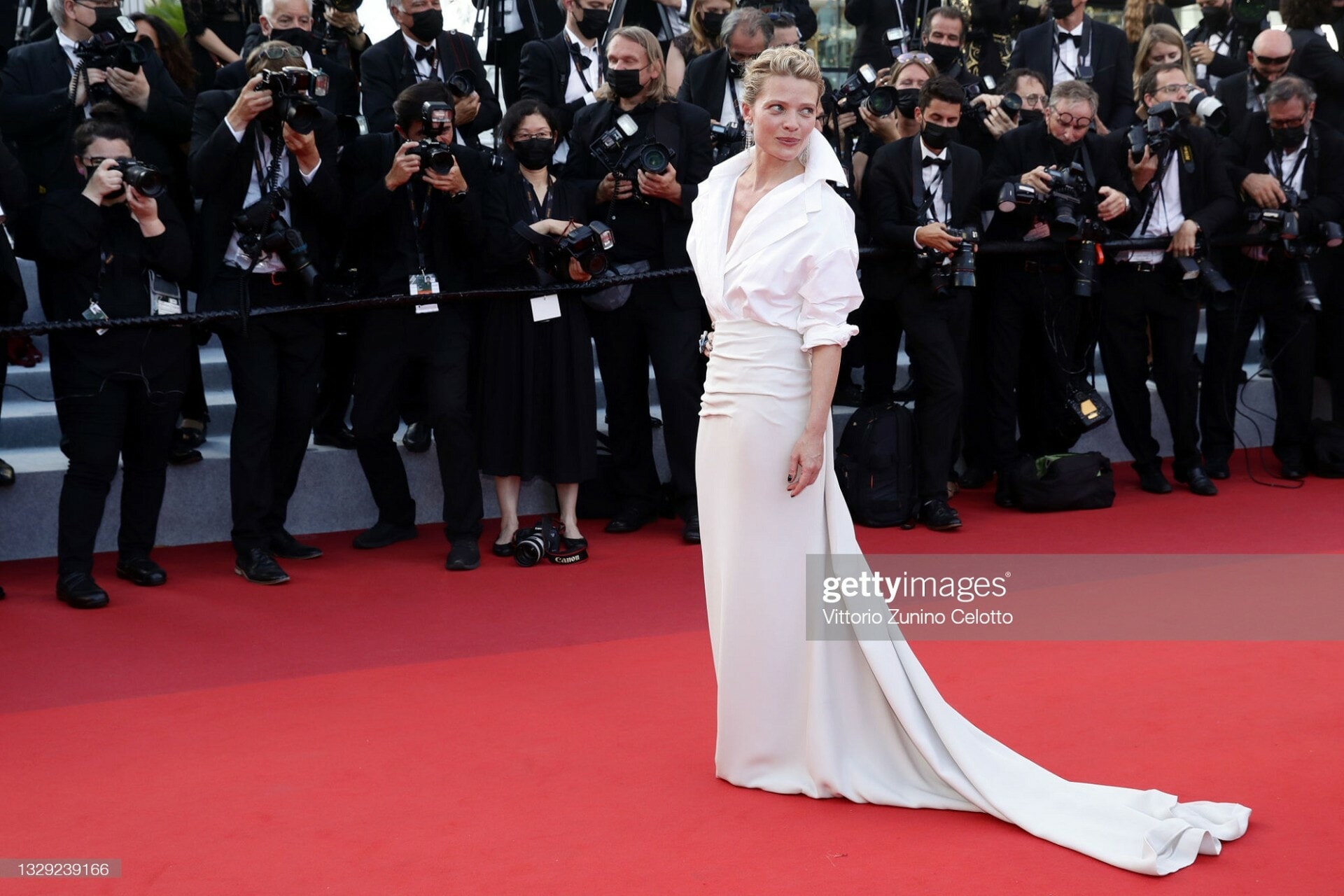 Actress Melanie Thierry was the epitome of effortless elegance. Her tailored, all-white ensemble by Valentino couldn’t have been more perfect for a summer event in Cannes.

A backless dress is always a crowd pleaser. Natasha Poly looked exquisite in her full-length Valentino cutout gown with a high slit. The Russian supermodel completed the look with a sleek chignon, allowing the dress to take center stage. 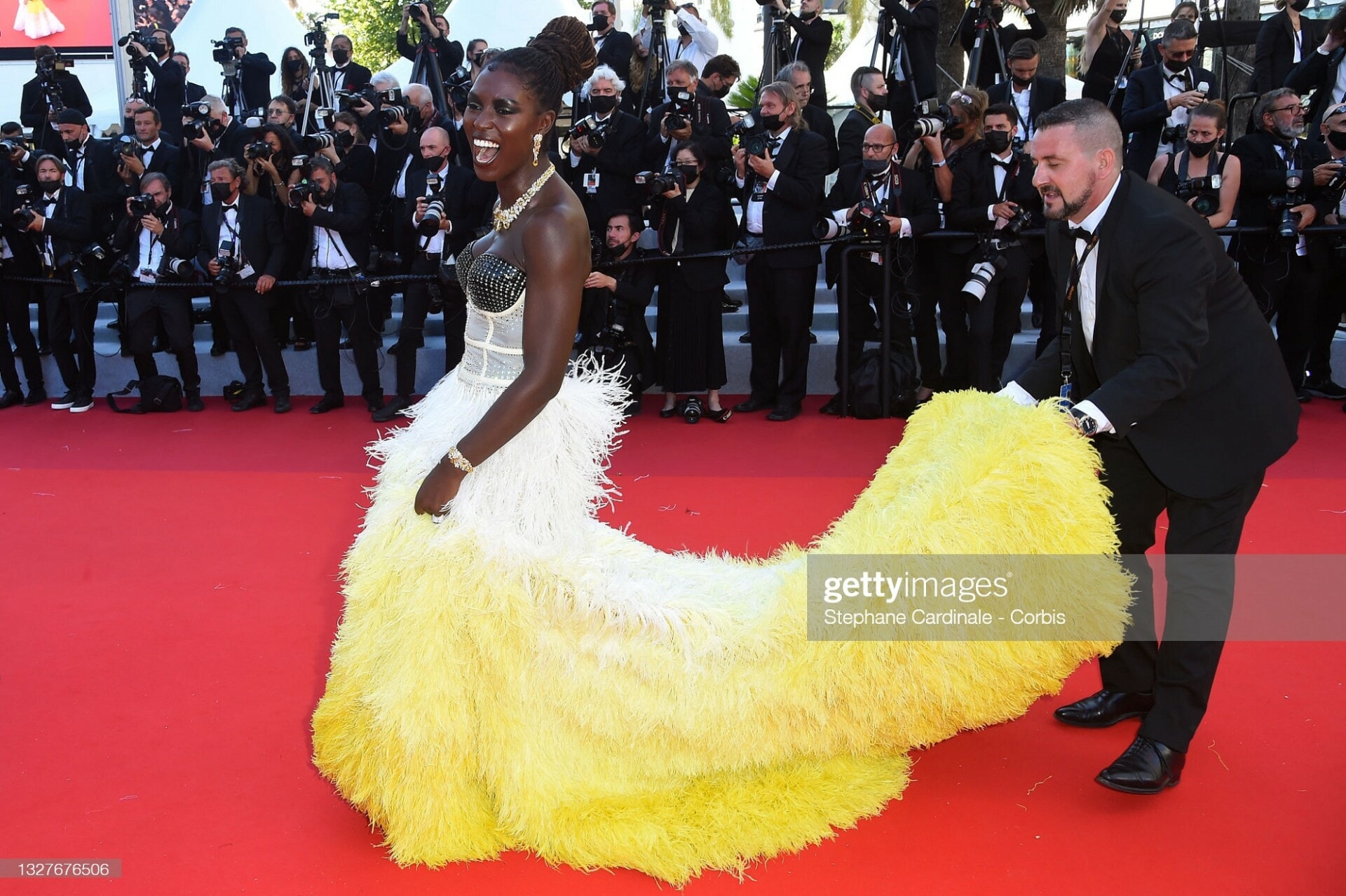 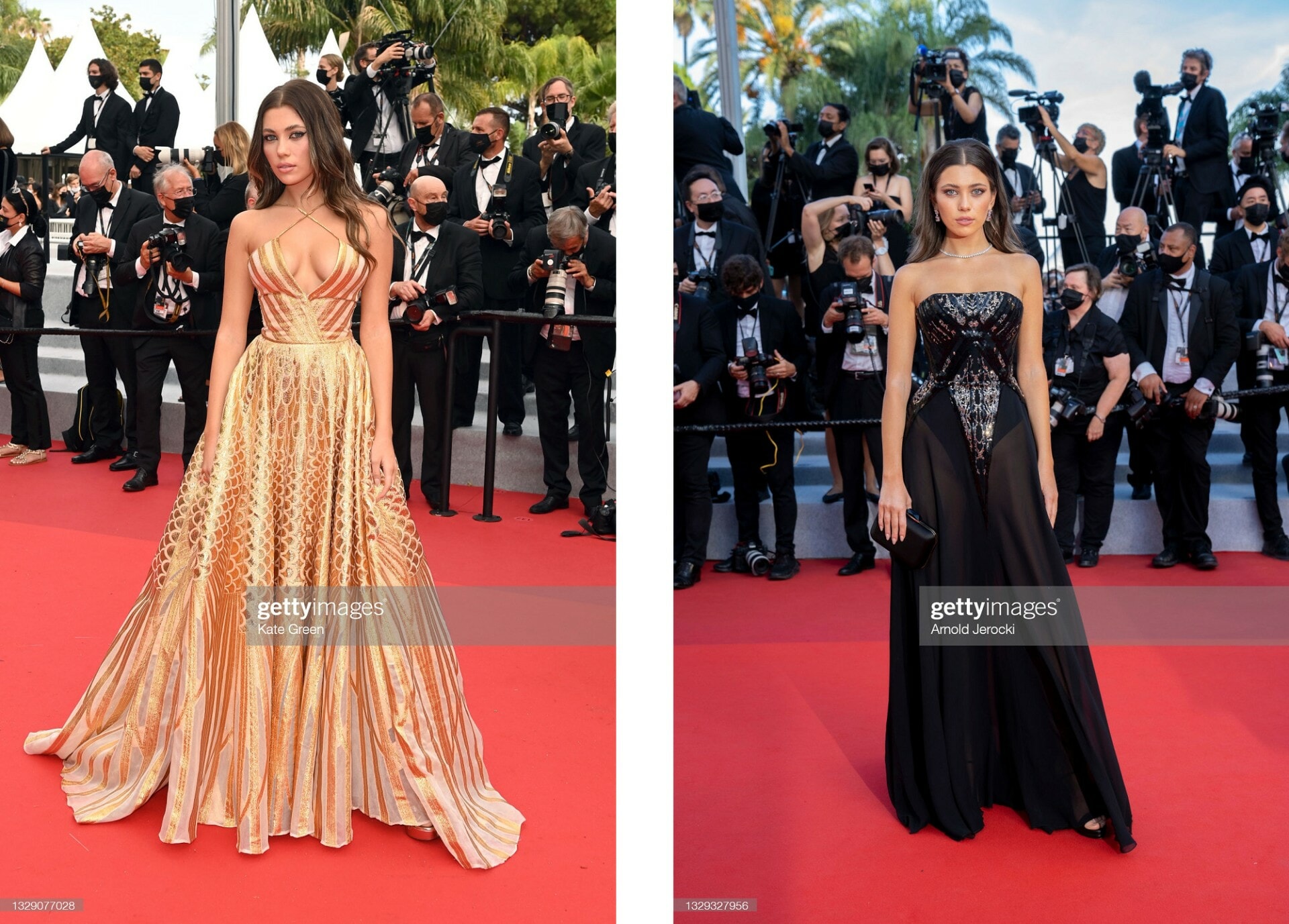 Amelie Zilber – influencer and ambassador for UNICEF and L’Oreal – wore two contrasting gowns that would both look stunning for rehearsal dinners and after-parties on the French Riviera. The first was a strappy gold gown by Zuhair Murad, worn to the screening of “Les Intranquilles (The Restless).” For the closing ceremony, she switched to a sheer and flowing little back dress by Elie Saab. 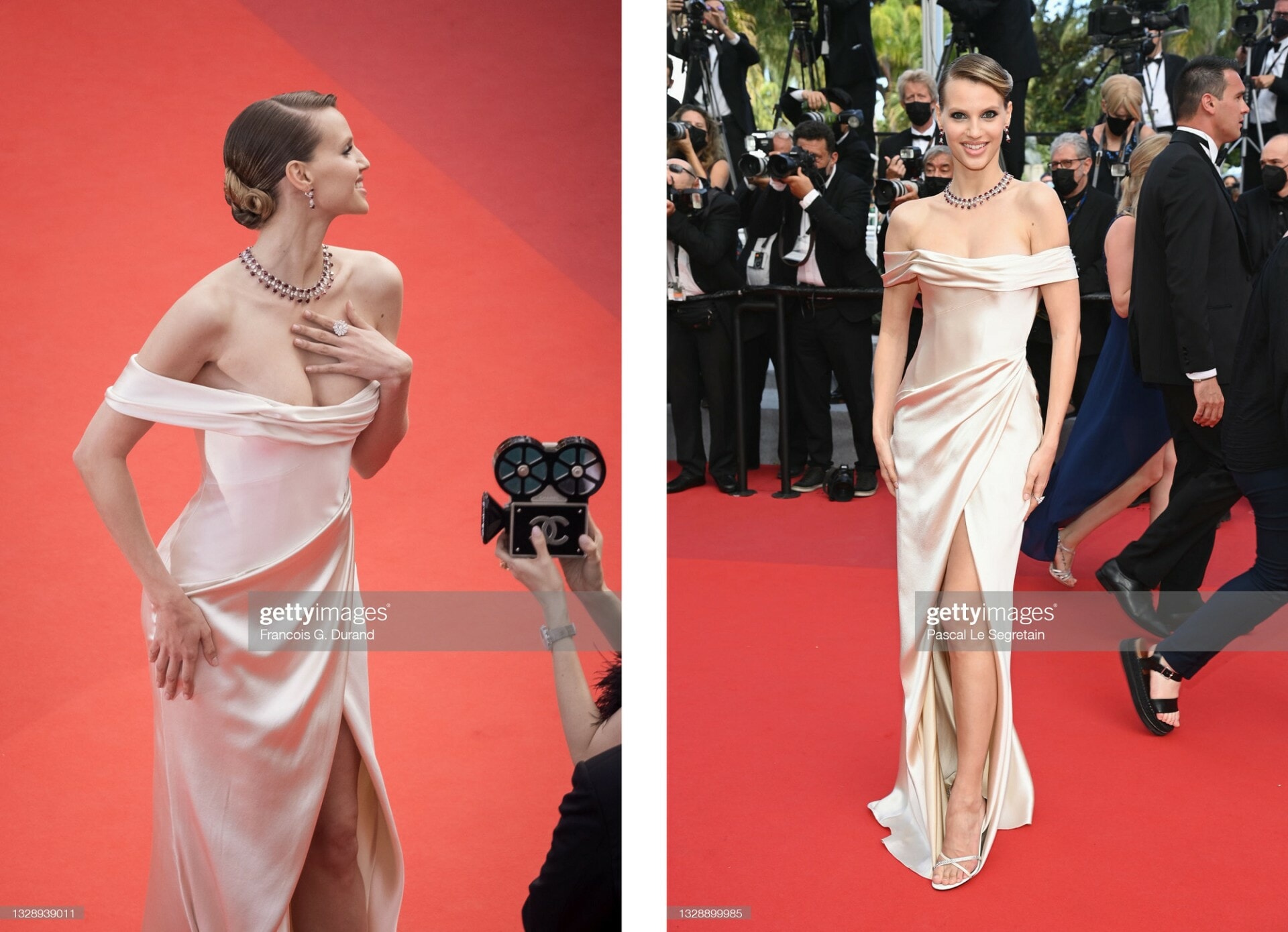 Everything about Nibar Madar’s red carpet ensemble was perfection. From her chic up-do to her pale pink Galia Lahav gown, the Israeli model was a Cannes Film Festival stunner. 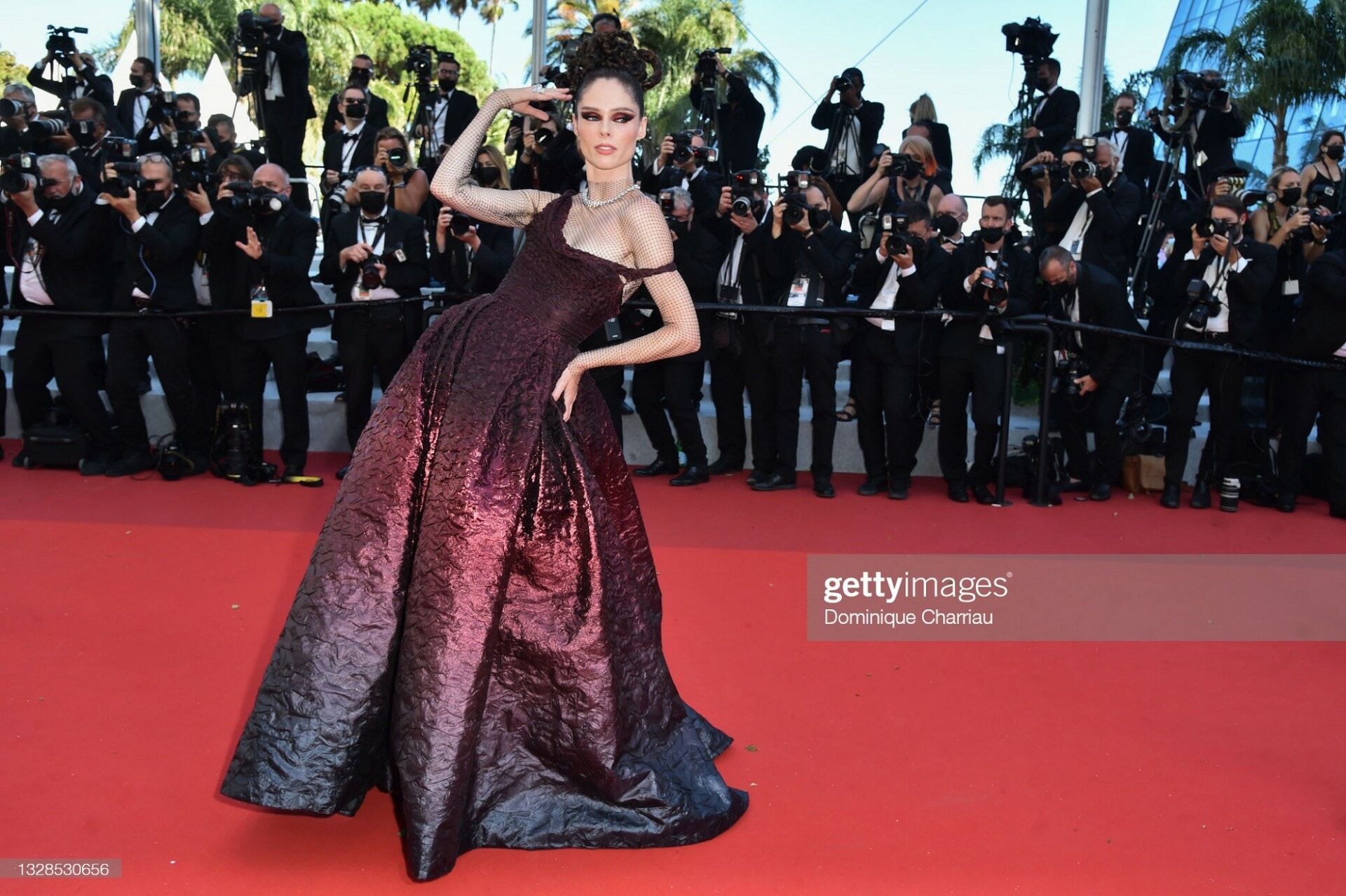 Supermodel Coco Rocha combined red carpet elegance with a hint of vamp. Her couture Dior ballgown was made of textured jacquard gauze, with a burgundy-to-black gradient.